The vast majority of personal injury claims result in settlement. Some estimates find that more than 97% of cases end in settlement rather than going to court. Why? Reaching an amicable settlement between the parties in a legal claim has advantages for both sides. 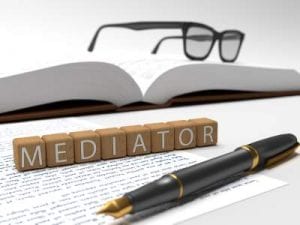 For the injury victim, a lawsuit often is a long, drawn out process. It can in some cases take years to receive compensation – if you win. If you do not win, you may receive nothing at all. During the long lawsuit process, you have to deal with the financial and other stresses that the case involves. You have to pay for your medical costs out of pocket, and have to be careful to avoid social media so that the insurance company cannot use something you post against your claim.

For the insurance company, there is a chance that the unpredictable jury will award the injured party more money than would have been agreed upon in a settlement.
Still, even though both sides have reasons to reach a settlement, sometimes it is impossible. Negotiations may stall and a compromise may not be reached. When this occurs, another option is to take the personal injury claim to remediation.

Personal injury claim mediation may be thought of as a sort of assisted negotiation process. A nonpartisan mediator is hired to hear out both sides of the claim. Evidence is offered by each party, and the mediator communicates with both sides to come to a conclusion that both can live with. A mediator is in most cases an attorney or a retired judge. He or she usually has specific training and experience in the specific type of injury case in question. They also have special training in mediation and dispute resolution.

The job of the mediator is to be an objective third party who can manage the two conflicting sides in an assisted negotiation to get around the previous obstacles that prevented a settlement to be reached.

Mediation can be agreed upon by both sides. Or, it may be ordered by the judge before a lawsuit is begun.

It is similar in some ways to arbitration, but there are differences, too. Mediation and arbitration involve a third party hearing each side’s argument; the two sides typically are the injured party’s personal injury attorney and the attorneys for the insurance company.

However, mediation is different from arbitration in that the goal in the former is to encourage both sides to come to an agreement both can accept. In arbitration, a decision is imposed upon both by a judge or another authority. The mediator does not pass any kind of judgment or ruling. Rather, he or she discusses pertinent issues with both parties, makes inquiries and suggestions, and delivers offers to each side.

The mediation process is fairly informal, but it is still critical to take care with what you say and how it is said. The attorneys for the insurance company are listening carefully. Your attorney can assist you in preparing for the mediation meeting. This will include what you should and should not say, and how to present you in the best light.

Remember that mediation has no guarantee. It will not necessarily end with a settlement. If no agreement can be reached, the outcome still may be a personal injury lawsuit. But if an agreement is reached, the mediator will write up formal settlement paperwork that is signed by both parties and filed with the court.

If you have been in an accident, we can help. Please contact our law offices today for a no-obligation consultation regarding your personal injury claim.