Is Lane Splitting Legal In NJ

New Jersey motorcyclists as a group represent the most vulnerable segment of roads users. They are 28 times more likely than car occupants to die in a motor vehicle accident, and 5 times more likely to get injured in a crash according to the NHTSA. Despite this, the number of motorcyclists keeps rising mainly because people love the maneuverability and speed of motorcycles.  For example, you can easily maneuver your motorcycle away from a heavy traffic jam by lane splitting because of the narrow nature of a motorcycle.

What Is Lane Splitting?

Lane splitting is when a motorcyclist rides between lanes or rows of stopped or slow traffic moving in the same direction. The practice can actually help clear some traffic and also eliminates the chances of a motorcyclist being rear ended.  However, lane splitting can become dangerous when a car suddenly changes lanes into the path of the motorcycle. A number of riders lane split in New Jersey when they find themselves stuck in a traffic jam, but lane splitting is actually only legal in the State of California. Lane splitting is not addressed directly by New Jersey law but neither is it authorized in the state. 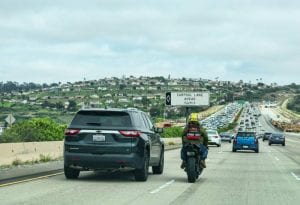 Since lane splitting is technically illegal in New Jersey, it may be difficult to convince a court that you were not the at-fault party if you were injured in a lane splitting accident. What this means is that you may not get the settlement amount that can cover your medical bills and other damages you suffered in the accident. In such a situation, an experienced lawyer can identify loop holes in the law that can increase your chances of getting the compensation you deserve. You should take pictures of the crash scene immediately it happens if you are not seriously injured. Your lawyer can use the pictures as evidence during your personal injury case.

You should wear clothing that makes you more visible on the road when riding a motorcycle. Some riders are known to wear bright red and orange jackets. Always wear a helmet when riding a motorcycle because the CDC indicates that helmets reduce the risk of fatal injury by up to 37 percent. There are other things you can wear with the helmet to protect yourself. Another safety precaution you can take is only lane split after checking your surroundings.