Making an illegal u-turn in front of another driver can lead to a serious car crash, fines, points, and insurance hikes. A safer way to make a turn is to stop, look for oncoming traffic, and then proceed with caution. You should do this when you know that vehicles 500 feet away can see you. That means that making a u-turn when there is low visibility, or in an area with a curve or a hill where drivers ahead or behind you cannot see you is a dangerous maneuver. You should contact a car accident lawyer if you have been injured in an accident caused by a driver making a u-turn.

You need to be cautious when making u-turns even in areas where u-turns are allowed. The following are some of the consequences of unsafe u-turns:

You can still get an improper turn ticket in New Jersey even if you did not cause an accident while making an illegal u-turn. You can receive a ticket for not yielding before making a turn or improperly turning at a traffic light and so on. These tickets can add up really fast and affect your driving record.

The At-Fault Party In A U-Turn Accident 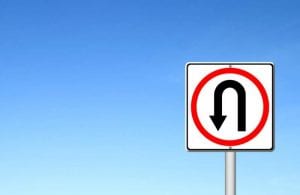 The at-fault party in a u-turn accident is often the driver that was trying to make the u-turn. This is especially accurate if the driver was making a u-turn in low visibility conditions, or the driver blocked traffic while making the u-turn. The driver will likely argue that you acted illegally or were more negligent than he was when you decide to sue. An experienced car accident lawyer can gather evidence that can prove that the driver that caused your accident is at-fault. Your lawyer can also negotiate on your behalf with insurance companies.

How To Avoid Accidents Caused By Illegal Turns

You need to take the following precautionary measures to avoid an accident:

You may be entitled to compensation if you are injured in an accident caused by a driver making an illegal u-turn. An experienced car accident lawyer can help you obtain compensation for car accident related expenses such as medical treatment, car repair payments, hospital bills, prescription pain medication and more.