How To Report NJ Aggressive Drivers

You have probably seen many drivers making dangerous maneuvers on the road and wished that there was a police officer around to arrest them. You are not wrong to be concerned because these types of drivers have caused many fatal accidents in New Jersey. Do not show an aggressive driver an insulting gesture or glare at them because that may only make them turn their aggression on you. Fortunately, there are safer ways to deal with such drivers.

In New Jersey, you can dial #77 to report aggressive or erratic driving that is putting motorists at risk. As a matter of fact, drivers made 23,884 reports to the #77 hotline in 2018 according to NJ.com. The New Jersey State Police operate the #77 hotline specifically to report aggressive drivers. Not many people know about this hotline because dialing 911 is what is often associated with the police. You can use the hotline to report drivers that blare their horns aggressively, drivers that are road raging, or drivers that are harassing other motorists. A recent amendment now makes it possible for you to use the same hotline to report distracted driving.

Only use 911 to report life threatening emergencies such as suspected criminal activity, motor vehicle accidents and so on. It is true that 911 calls are often given priority. Police respond to #77 calls according to availability, how close they are to the incident, and how serious the report is. Your calls may also not be taken automatically, but when your call is taken make sure you provide details about the location of the incident, details about the aggressive driver’s vehicle, and also your phone number.

What Is Aggressive Driving Behavior 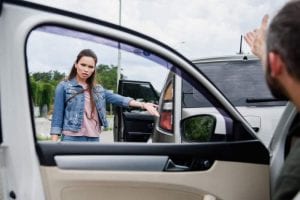 A motorist that is speeding, recklessly changing lanes, tailgating, or running red or yellow lights, is probably and an aggressive driver. Shockingly a study found that a number of people that display these kinds of driving behavior do not identify their behavior as aggressive. Aggressive driving is becoming a major problem in New Jersey because the streets are becoming more congested. There has also been a reduction in levels of law enforcement and this makes aggressive drivers think that they can get away with their reckless behavior.

Tips For When You Encounter An Aggressive Driver

Apart from calling #77, the following tips can help you prevent road rage situations from getting worse:

You should always keep your emotions in check before you start driving because you never know when you will meet a driver that may provoke you. Plan ahead for your commutes and be ready for delays and frustration.